Remembering One of Work Stride’s Developers 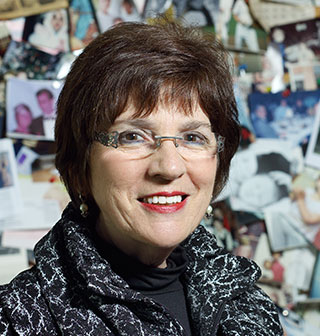 In November 2019, the Work Stride Managing Cancer at Work team lost Terry Langbaum, one of the program’s co-developers and a beloved supporter, friend and compassionate, inspiring leader. Terry fought valiantly against cancer most of her adult life and, as a result, became a staunch patient advocate and champion for cancer survivors. Her contribution to the cancer community was widespread. Her absence is felt in so many ways; however, we, as part of the Johns Hopkins HealthCare Solutions team, will work to ensure that Terry’s legacy lives on.

One of the ways we will ensure her legacy lives on is to give you, our Work Stride community, a glimpse into what made her so remarkable.

In Terry’s role as the chief administrative officer of cancer services for the Sidney Kimmel Comprehensive Cancer Center, Terry called on her experience as a cancer survivor to identify ways to improve the experience of cancer patients as they journeyed through diagnosis, treatment and survivorship. During her tenure there, Terry worked with her colleague, Lillie Shockney, on cancer survivorship initiatives, and together, in 2012, they launched Managing Cancer at Work to help Johns Hopkins employees who had been diagnosed with cancer. In 2016, Terry and Lillie collaborated with Johns Hopkins HealthCare Solutions, a business unit within Johns Hopkins Medicine, to bring the program to employers. Today, the program reaches more than 300,000 employees and their families all over the country. Terry’s personal experience with cancer, and working throughout her own diagnoses and treatments, made her passionate about bringing the mission and purpose of Work Stride to others.

Beyond the walls of Johns Hopkins Medicine, Terry was known as a fierce advocate for ensuring quality, effectiveness and efficiency of cancer care. She represented Johns Hopkins as one of the original 13 members of the National Comprehensive Cancer Network, an alliance of leading cancer centers devoted to patient care, research and education. She also served on the board of trustees of CancerCare and the Maryland chapter of the Leukemia & Lymphoma Society.

Terry was a compassionate and inspiring leader who spent her life helping others. During her remarkable 44-year career with Johns Hopkins, Terry gave her heart and soul to Johns Hopkins and to patients and their families. Terry’s impact will endure for many years to come, as will our immense admiration for her and appreciation for all that she did.

Terry Langbaum left many legacies and one was how to cope with medical crises. A large majority of her life involved her being diagnosed and treated with many different types of cancer, finally succumbing to the last one that was very advanced. She worked continuously, valuing the feeling of being productive and not allowing any of the cancers to take away her joys, one of which, truly, was working at Johns Hopkins. She taught everyone that it isn’t the fact that you HAVE cancer; it is how you emotionally cope with it once you are diagnosed. She never let it consume her. She never let it derail her plans.

If she were living today, Terry would be serving in some leadership role regarding the COVID-19 pandemic, helping people to accept our new normal and providing guidance on how to work safely. I think about her every day. I “talk” with her every day.

For those who have never experienced cancer personally, the COVID-19 pandemic has some strong similarities. First, it came out of the blue, and suddenly, for people in the United States. Once COVID-19 was confirmed (like a cancer diagnosis being confirmed), a lot of unknowns remained about how it behaved, how it spread, what were its symptoms, what might be its treatments, and this incremental knowledge continues to change over time. Such is the case for cancer, too. You learn you are diagnosed, more tests and scans are done to learn more about the behavior of the cancer cells themselves. Then you get a surprise that the cancer has spread further than originally thought, which totally derails the original treatment recommendations. Then more symptoms are discovered. Then treatments produce side effects and other treatments are tried. The patient sees some people with the same kind of cancer recover and become cancer free while others end up dying from it, despite every effort to save the individual. It is a roller coaster like no other. Terry would be saying, “Hold on for this long unpredictable ride, engage in your cancer care by learning about the disease and its treatment. Utilize your oncology nurse navigator to get the necessary support, navigation, education and the ability to confidently participate in the decision making about your care and treatment. Remain active and productive. Don’t let cancer derail you from what brings you joy.”

Terry set an example for others to learn from and follow. Keep going. For those with advanced cancer, determine when you want to stop treatment and focus on preserving your quality of life in exchange for quantity of life. Existing is not the goal; living and enjoying your time that remains is the goal.

I have had many downright hysterical laughs with Terry that nearly knocked me out of my chair; I have cried with Terry, too, though not about her own clinical situation but about her showing empathy to others who are dealing with hard times. She was a very dear friend. We had no secrets.

What is important is that she lived a full life and taught everyone who knew her how to live their best life. And she still is doing that.